Well two weeks after the great infusion things are going well...actually things are going brilliantly. Unlike King Canute the waves of MS have retreated in front of the very presence of King Alemtuzamub. Sat invincibly on his throne, the great Alem Tu Zamub (as he surely would have been called in Ancient Egyptian times) has sent the numbness and the pineth of needleth running...ha, running I tell you.

The great vampire of Hertfordshire came and span my blood to check all was well. She even showed me how, like a medieval alchemist she could turn my blood into a clot, some gel and some liquid serum...then came the news...the serum doesn't go to LA with the blood, no...it goes to Geneva...wow, never been to Switzerland, sure I've eaten Toblerone but now I'm bloody well in Geneva.
Posted by daveyc at 08:49 1 comment: 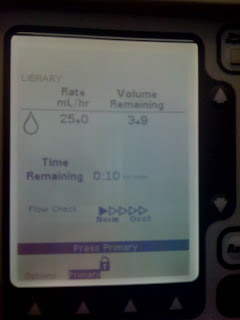 10 minutes and we're out of here 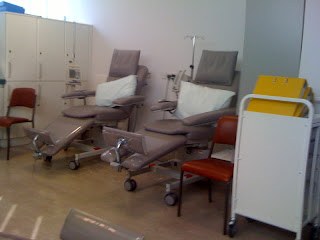 ...sums up the mood for festival goers today... No more steroids (they don't want us failing a drugs test I guess) and plenty of Piriton, which now free to work without the constraints of the steroid uppers left me (in particular) in a semi dozing state most of the morning. I revived long enough for a couple of rounds of angry birds before succumbing to the rash again. I claimed I could soldier on until there was more rash than skin and I was beginning to look like the singing detective. Time for more Piriton.
And so a particularly unremarkable penultimate day came to an end. Tomorrow is the final countdown...the last day of Alemtuzub for this year...I feel a in tear coming on.
Posted by daveyc at 18:38 No comments:

...started off as flat Wednesday to be honest. Our merry band of four were a bit flaked out..no one said much as obs were done, cannulas fitted, iv's attached and drugs pumped. Around about lunch time the pace of chat picked up...a bit of celeb gossip ( I met Posh n Becks in a furniture shop) followed by personal gossip (2 met partners through online dating...including the somewhat dubious sounding “toy-boy warehouse.com”...but I am the oldest so I'm probably out of touch with modern sexual trends.)
Excitement burst into life in the afternoon...North by Northwest (it's always him) spotted an air bubble in his line and rang the bell reserved for emergencies...well all hell let loose. Bells and whistles went crazy: 4 nurses, 2 neuros and a couple of crash teams appeared in about 10" flat....Jesus, what are they putting in us? Emergency over (actually the air bubble wasn't an emergency after all – thankgod we didn’t press for a cup of tea) things returned to normal until the emergence of a rash on me and N-by-Nw...quite normal said Moneypenny and pumped us full of 20 milligram’s of Piriton...don't worry 40 is an overdose so your only half way there...you'll just feel a little sleepppppppyyyyyzzzzzzzz
Posted by daveyc at 18:35 No comments: 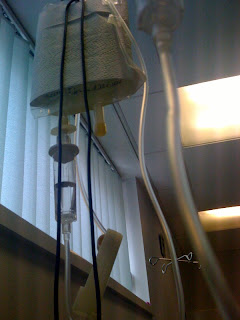 Its hi-tech Tuesday here at the Alemtuzamub festival...North-by-Northwest asked why the Alemtuzamub pouches that drip chemicals into our arms were wrapped in kitchen roll. Well, they
react badly to direct sunlight of course was the answer. So this being such a hi-tech trial had they ordered in special reflective covers made at NASA for the Shuttle space programe? No, Asda twin roll absorbant kitchen roll (2for1) will suffice. Talking of drips, toilet time has become a waltz with the drip stands that hold the Asda wrapped chemicals as we make our way cross-corridor to the little room. They, the stands, have the same casters as Asda trolleys, rolling in every direction except the required one. And what's more there are only three wheelie stands for four patients so we have to time our bladders with each other. Don't let anyone tell you the NHS wastes money.
I shall get a little Zen on you now to finish day two...What's the sound of one man peeing with one arm attached by tubes to a stand that only has room to fit behind him? Bollocks, shit, ouch,
pissing hell, pissing floor
Posted by daveyc at 20:29 No comments:

And we're under starters orders here at Clinical Research in this 'The Alemtuzamub 50000 Guinea Stakes'. Cockney Lady, Quietly Spoken Girl, North-by-Northwest and Davedandinfused look in great condition as they prepare for the starters signal....And we’re off...Cockney lady has made a good start... She's cannulated early, a good strong vein and she's holding her own nicely as the steroids are pumped in. Quietly Spoken Girl gets off to a solid start followed by North by North west and Davedandinfused brings up the rear. They're all up now...the steroids staying the course nicely...a lot of metallic taste being reported...but, oh dear, Quietly Spoken Girl has pulled up, she's feeling faint, turned a little pale there...the steward is in to check her...and she looking concerned but...she’s giving the all clear but not before North-by-Northwest and Davedandinfused have passed her on the inside. Great strength of character there from Quietly Spoken Girl. Now North by Northwest has stopped for a loo break...not for the first time...and now into the section of the race we’ve all been waiting for... Alemtuzamub by infusion for 4 hours...no pause for toilet breaks, athletes will take them on the course a la Paula Radcliffe...And this is a fantastic performance by Quietly Spoken Girl and Cockney Lady....barely pausing for a jacket potato...but can they keep this up...Cockney Lady is looking good for the win now...but no, Quietly Spoken Girl recovers from her early stumble to burst through on the outside....and there is the finishing line....Surprise winner Quietly Spoken Girl can barely contain her excitement...Cockney lady who led from the front has just been pipped at the post....North-by-Northwest comes in third after too many toilet breaks early on and it's a very disappointed Davedandinfused crossing the line last.
Well, plenty more action to go at this festival of Alemtuzamub in the coming days.
Posted by daveyc at 22:31 No comments:

Well I had it all planned out. Friday would have been my final injection. Two years, 312 syringes, 624 paracetamols (give or take a few). I had a bottle of bubbly on ice. My speech was prepared. I had it all planned out. With this prick I thee finish. The kids were going to cheer as I fired the rebiject (Mark II) for it's final journey. One more owch accompanied by a wide eyed stare for 10 seconds and we would toast the end of hamsters in our house and more importantly in my arse/thigh/stomach.

All I had to negotiate was the final pre-Alemtuzamub appointment 1 week before giving up my rodent addiction.
Then they ruined it. Moneypenny announced, casual as you like..."well no more rebif for you".
I'm sorry I said
"You don't take the rebif this week ahead of the trial extension to Alemtuzamub" reiterated Moneypenny as though that was obvious.
But I haven't given up yet. I can't just go cold hamster like that. I might get the shakes. What about the Champaign? And my speech. I had it all planned out...
Moneypenny shrugged her shoulders.
So here I am on a Wednesday without hamsters...not a prick in sight. Oh well, this time next week I shall be full of Alemtuzamub and couscous. No more hamsters. No more chicken pate. I think I'll open the bubbly.